Be An Innovator with Flow Builder: Let it Flow

Get ready everyone - it's #AwesomeAdmin challenge time again! It's another "Be an Innovator" challenge, this time harnessing the power of Flow Builder. I love that the Admin team have been rolling out these challenges, as it pushes us to step out of my comfort zone and try something new - something as Admins we need to do all the time, but might not have the means to.


For those of you like me that are still total Flow noobs, I couldn't be more excited to give this a try, and the best part is I feel like I'm hanging out with Admin Evangelists Marc Baizman and LeeAnn Rimel in my home office (couldn't help but include the photo of us below!)


Modelled after the success of last year's Be a Builder and Be an Innovator (with Einstein Prediction Builder), this Be an Innovator challenge is once again being spearheaded by the wonderful Rebecca Saar.


For so many of us, it's hard to get into the groove of Flow, especially when you don't have your own business use case for it - something I'm definitely hoping to change. As per previous challenges, if you get active on Twitter you can go into the draw to win some fun prizes, including an #AwesomeAdmin tshirt and some other goodies.


The challenge is live with the videos being released daily until May 1, and the Trailmix needs to be completed by May 31 to receive your special Trailhead community badge! I'm really excited to harness the power of Flow Builder, with a little help of some friends.


That's it from me - I talked a bit about how the #AwesomeAdmin challenges came to life in a previous blog if you're curious! 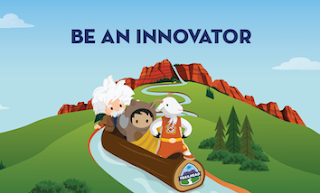 Soundtrack: Let It Flow - Kruv Man
This post's soundtrack is a little different - Salesforce MVP Amnon Kruvi had a bit of fun with his session on Invocable Methods at a London Developer Community Group meetup last year. Highly recommended if you haven't already seen it!
at April 24, 2019 No comments:

Email ThisBlogThis!Share to TwitterShare to FacebookShare to Pinterest
Labels: #AwesomeAdmin

My #LifewithGoldie Adventure - Brighter than Gold

Let's rewind to the end of March 2018, San Francisco, TrailheaDX. I knew nothing and no one, and was greeted by the community with open arms. I had a great time learning at bootcamp, and was excited for the conference.

I was all set up with the Events app and was learning about the swag situation (I'd heard that Salesforce events had pretty good swag!), but all I was really hoping for was a Trailblazer Hoodie. Anything else I could possibly obtain would be a bonus. I had seen people wearing them around all through bootcamp, and all over the posters, and I thought it was the coolest thing ever! I wanted people to know that I was a Trailblazer, no matter how brand new I was - I had just had the best few days of my professional career after all.

I arrived bright and early for TDX the next day, and pretty much ran to Camp Quick Start. If you earned three Three badges there, you'd get your Trailblazer Hoodie - while supplies lasted. I don't think I've ever been so anxious to earn a badge since! I remember this super cool chick with polka dots and purple hair was coming over to check each time I'd done a badge and cheering for me (heyyy Melinda).

And then I was done! I had finished my three badges and unlocked a brand new Trailblazer Hoodie. I went straight to the Trading Post before anything else - I needed to make sure I got the right size... So within the first hour of TDX, I had my precious hoodie! It was the first ever piece of swag I had earned, and was my most treasured piece from TDX... and then l I met Appy, who I now had a matching outfit with! We headed to a session on Women in Technology Community groups where we met Allison and Bhavana.

I sheepishly went up to introduce myself, and we exchanged contact info, but with a conference this size, you never know if you'll actually ever see them around again, let alone stay in touch in the future.


And then this happened... I saw my first ever Golden Hoodie awarded... to Bhavana, who had just inspired me the day before!


I was in total awe. Of everyone I could have seen receive the Golden Hoodie, I happened to see someone who had just had a profound effect on me, and was also one of the few people I happened to know!  At the time I didn't know what that actually meant, only that it had to be a pretty big deal as Bhavana's story was pretty amazing. I sent this, just to make sure she knew... 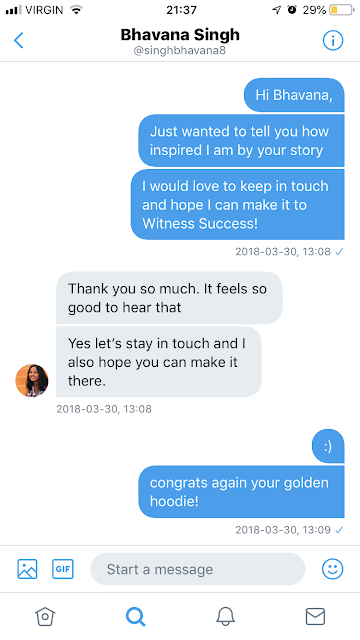 So you've all read my stories since then. Bhavana and Allison have been mentioned in them frequently. They have become some of my closest friends - in fact we even do a fitbit challenge together every week to encourage each other!


Fast forward to April 2019 - I've had the best professional year of my life, frequently wearing my hoodie on my adventures with Appy. But then something happened. This past week at Toronto World Tour, just over a year since seeing Bhavana awarded the Golden Hoodie, and telling her how much she had inspired me... the same thing happened to me!


Incrediblly honored to award @zazamataz a golden #Trailblazer hoodie for being such an inspiration to everyone here in Toronto. TY for sharing your story how @trailhead helped supercharge your career as a woman in tech by learning @salesforce skills #lifewithgoldie pic.twitter.com/QYClFYqSDC
— Sarah Joyce Franklin (@swbjoyce) April 11, 2019

I was completely blown away to think that I had done something to deserve such an honour - I just want to help people. Throughout the day I was approached by so many women who told me how inspired they were to hear my story, and honestly, this was the best part of the whole experience!

I still can't quite believe that after only just over a year of wearing my favourite hoodie, I got a bit of an upgrade. I was asked by people throughout the day what they had to do to get one, and that's the thing - it's not something you can really set out to earn. I have had an amazing year professionally, and have found the time to give back to the community that inspires me, and somehow that was deemed worthy enough for such an honour.

I'm still coming down from the crazy high of TWT, and from all the messages of congratulations from all of the world - I've genuinely cried multiple times. I am especially grateful to my emotional support crew who came to sit with me - Aleks, Sarah and Scott from the True North Dreamin Team, Brandon - my former AE, and Karen and Myra - my colleagues.

And so the cycle continues. In a few weeks I will return to San Francisco for TrailheaDX 2019, a long way from know nothing and no one just over a year ago, and totally in awe of everything that I've been able to accomplish between now and then.

Soundtrack: Brighter than Gold - The Cat Empire
so... I of course don't actually think I'm actually "brighter than gold" - this song has just always been a favourite of mine, from my favourite band... and the lyrics also talk about not being able to sleep - which I definitely experienced during all of this!

One of the main reasons I chose Toronto over Vancouver was because I would be much closer to Europe, and could visit all the time if I wanted... yet seven years have passed, and I was still yet to make the journey... In fact, my favourite uncle lives in London - he's literally my closest geographical relative, so when I first found out about London's Calling, I decided that I was going to attend!

Having never been to London, I obviously wanted to pack as much sight seeing in as possible, and managed to even nab tickets to see Hamilton! It's funny that I've been able to see Hamilton on two separate occasions, both on trips to Salesforce Community events.

Appy and I even went to Buckingham Palace and managed to be in the right place at the right time and saw the Queen leaving! I actually saw her face and her snappy bright orange hat and jacket. This amused me even further when I was chatting with Londoners who said they've never seen her in person!

So despite getting lost on my way from the tube station, I made it to Skills Matter. It was wonderful to see some friends from across the pond, and finally meet some others that have only been twitter buddies! Of course I ran into some friends from North America, and had a great time spending my time with the wonderful Lizz Hellinga.

London's Calling is a really neat conference. To start with, the space is really cool. CodeNode is London's largest space dedicated to technology events, and really add a special feel to the day. All the rooms are "key" themed, with the bar aptly called "SpaceBar". 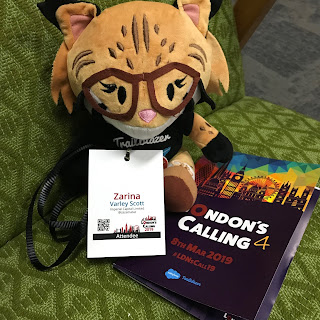 The content was literally world class, with presenters flying in from all over the world. The day was off to a great start with hugs from friends - old and new, and the opening session from the kick ass organizing team. The time was then right to then head off to my first speaker session of the day, Goodbye Cloud Flow Designer, Hello Flow Builder from Claire Jones, who was a total champ and filled in at the last minute.

Up next was a session I've been excited to catch for a while from Salesforce Sister Lizz Hellinga, Admins are Critical Change Agents. Lizz and I then some some time getting acquainted with the wonderful sponsors who make events like this even possible, before a traditional English pie for lunch. I would call it "tiger style" with mash, mushy peas and gravy, but I'm sure others will correct me. The main thing was, everyone had a pie - I'd heard all sorts of horror stories of PieGate from 2018's event. #PieForAll! 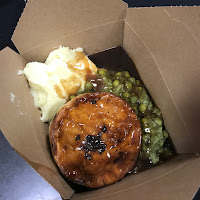 Just enough time to do some #LightningChampion booth duty before Callum Gardiner and Danielle Ahmed's session How do YOU Stand Out?, before Lizz and I fell in love with Stacey Torman and her Embracing and Activating Your Personal Brand session. I should have known I would like Stacy's session - she took a photo of my shoes earlier in the day!

Next was my for my final speaker session of the day by way of Louise Lockie and her Learn to Leverage the power of SOQL for Admins session - something I'm hoping to put to use after some time to breathe (and maybe when I haven't been on 4 international trips in a single month...)

And if all of those insightful sessions didn't sound like enough, it was time for the Closing Keynote from Dr. Anastasia Dedyukhina, Mind Hygiene: how to take care of your brain in the age of digital distraction. This was bar far the most eye opening session of the day, and I highly recommend checking out her Ted Talk, and anything else you can find!

So if my ramblings were not enough to let you know, I loved this event! Any one thinking of attending next year, I would highly recommend it, just make sure you book early as the waiting list ended up quite substantial! 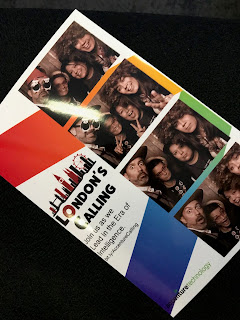 Extra special fun - this blog has the same title as the accompanying song!
Soundtrack: London's Calling - The Clash

It's no secret that I'm a fan of low code solutions. While I love dabbling in some html as much as the next person, and I'm look...