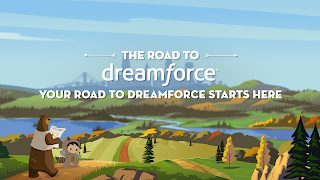 Ever since I discovered the Salesforce Community at Trailheadx earlier in the year, I have wanted to attend Dreamforce. I've heard it described as many things from "Sleepover camp for adults" to a "family reunion", and both sound amazing to me!

But here was my conundrum... how to get there by myself, without the help of my employer? Among the many people I spoke to about this, I was lucky enough to chat with the wonderful Mike Gerholdt and Rebecca Saar from the Salesforce Admins team when they were in town for the Toronto World Tour.

They offered up some key advice "speakers get to attend for free", but also took that a step further telling me that "everyone has something to share". They made me see that even though I'm only in my first year of my Salesforce journey, I had something to say, and thus "Empower your admin and supercharge your business" was born.

Another piece of advice given to me was to partner up with a buddy, so I ended up joining forces with the first Salesforce friend I made, Michelle Hansen. We met the night before Trailheadx when we were both waiting in line together for an Ohana pre-bootcamp dinner.

We started working together on an outline and an abstract, and were finally ready to submit! After what felt like waiting forever... I received an email from the Admin team, at which point I called Michelle straight away to tell her that our session was accepted and WE WOULD BE SPEAKING AT DREAMFORCE! What's even more exciting, is this is the first Dreamforce for both of us!

Why am I so excited about this? Well, obviously all the Ohana know why it's a big deal, but when sharing this news with my family and friends, I told them we've been selected out of 1900 submissions to speak at the biggest technology conference in the world!

So now for the hard part... We've got some serious work to do. Has your employer empowered you? If so, how, and what sort of affect did it have on the business? Anything you wish they would do to empower you? Let me know - I'd love to hear your thoughts!