- December 06, 2018
I’m feeling a lot of love for Toronto right about now… so it’s fitting that this is the week I got my “YYZ” tattoo the companion to my "SYD" tattoo (representing my two homes). Last night the Toronto trailblazer community events joined forces for a holiday party… and we ended up with double the number of attendees we were expecting! I honestly felt like I was going to cry!

Let’s back it up a bit… I took over as leader of the Toronto Women in Tech group after being inspired by Bhavana Singh and Allison Park at TrailheaDX, but it wasn’t until I’d met some other amazing WIT leaders at WITness Sucess that I realized the Toronto Trailblazer Community had a long way to go. It was pointed out that Toronto is one biggest cities in North America, and the Admin and Develioer groups we were only getting around 30 perople max, per meeting.
It was at WITness that I decided I was going to make it my mission to grow the commumity, as I have been fortunate to connect with the online Ohana, so I was hoping the Toronto community would be able to experience the wonder of the Ohana too! It helps that the leaders of the other Toronto groups are awesome people - they’ve made it a pleasure.
Right before WITness, I’d held my first ever meeting as group leader, and we had a solid turn out of seven. Before Dreamforce, I only had three attendees… but then the groups banded together for a Dreamforce Global Gathering, and we had over 60, which was the most any of the groups had ever had.
After the fun we had at the Global Gathering, I saw that a lot of other cities do combined group holiday events, so I thought maybe that would be fun for us, so I took on the challenge. Initially we were quite skeptical, because in the past they hadn't done well (expecting 30~), and there's already so much other stuff going on during the holidays.
We would have been really happy with 60 attendees again, but instead we got 100! The other leaders and I were just laughing to ourselves as the numbers kept growing and growing... so much so that the coat rack broke due to too many coats! I only bought 80 name tag labels in total, thinking we might not even need the second pack of 40!
This was where the almost crying comes back in… because it wasn’t just 100 people there for free drinks and food… it was 100 people who were networking and engaging with each other - everywhere I looked there were people scanning LinkedIn QR codes, laughing and having a great time. So many people thanked me on the way out and told me how much they got out of the evening, and I haven’t stopped smiling since!

It seems as though the Toronto community is finally starting to reach its potential, and I can’t wait to see what’s in store and start planning for 2019!
A huge shout out to the other group leaders, and our ever supportive sponsor, Slalom.
Soundtrack: Christmastime in Toronto - Gord Downie (may he Rest In Peace) 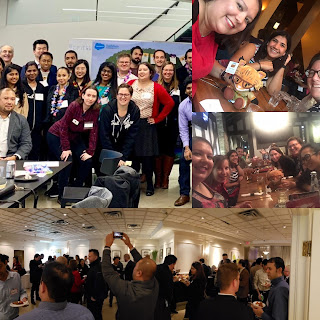 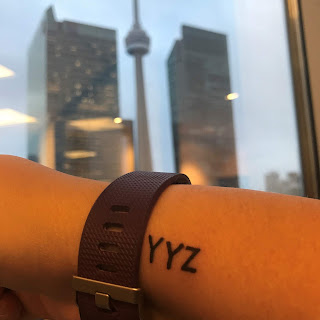