- January 21, 2019
Throughout my Salesforce journey so far, I have met so many amazing Women in Technology pretty much every where I've been. When I first started dipping my toe in the water of the Ohana, I discovered the Two WIT podcast, and worked my way through their back catalogue over a few weeks. It was during this time that I added something to the long term goal section of my Salesforce notebook - "guest on the Two WIT podcast".

It also happens that the next entry on my long term goals list was for "Ontario Dreamin", and this was a few months before I found out there were others with the same goal. Wonderful WIT, Misty Jones had told me I should get in contact with local Toronto MVP Geoff Flynn, and coincidentally we ended up with the same Trailblazer Community booth shift at Toronto World Tour last year. A few weeks later, I received an email from Sarah Deutsch Thornton saying that Geoff suggested she get in touch with me to talk about a Canadian Dreamin event.

We scheduled a call, and it was love at first chat! We shared each other's journeys and talked about our love of the community and about a Dreamin event for the Canadian community. Since then, we've worked very closely together and have made great progress with the core and greater teams. We even had a chat with Melinda about her lessons learned from being on the planning team of WITness Success, as we were pretty much making it up as we were going.

Cut to July 2018, and I attended my first Dreamin events, after all it would be helpful to have attended the type of event I was supposed to be organising... But this also meant after months of listening to Kristi and Melinda, I finally got to meet them both in person at WITness Success! 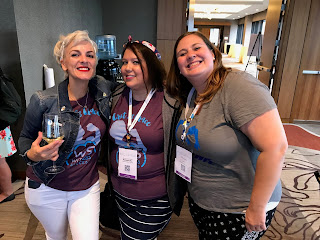 And alas, Sarah and I talk to each other constatly, for both official and unofficial reasons, we have not actually had the chance to meet in person yet. She's less than a four hour drive away, which by Canadian standards is really no far at all, but our schedules just haven't been able to align yet... Mainly due to the fact that I keep taking on more commitments!

So it's at this point in our story where these two stories collide. Two WIT put the call out for guests, be it Dreamin related or other, and of course being that I've been campaigning to be on the podcast since I met Kristi and Melinda, I jumped at the chance.

Those of you who know me know I can talk... for daysss, but of course I was still nevous as all hell, especially when that funky bass "guest" intro started playing. So without any more spoilers, aside from the fact that I didn't realise how Australian I still sound, please enjoy Episode #51 of the Two WIT podcast - #SolidChocolateBunnies.

Soundtrack: The Lady is a Vamp - The Spice Girls... because GIRL POWER!